Bwindi National Park is a remnant of what once used to be a very large forest, covering areas of western Uganda, Rwanda, Burundi and eastern Democratic Republic of Congo. The forest is home to numerous globally threatened species, including the mountain gorilla, chimpanzee, L’Hoest’s monkey and the African elephant. Bird enthusiasts can look forward to sightings of the Africa green broadbill, Grauer’s swamp warbler, Turner’s Eremomela, Chapin’s flycatcher and Shelley’s crimson-wing. The area is known as the most important forest in Africa for the montane forest butterflies, including African giant swallowtail and Cream-banded swallowtail.

The forest acts as an important water catchment where streams and rivers provide water to the surrounding densely populated agricultural land. The primary attraction in the park is the mountain gorillas. This population of around 340 individuals is half of the world’s entire population. They are endangered, yet here there are 4 groups that are habituated to the presence of humans in their natural habitat. Bwindi Impenetrable National Park offers some of the finest montane forest birding in Africa and is a key destination for any birder visiting Uganda. Amongst the numerous possibilities are no fewer than 23 of Uganda’s 24 Albertine Rift endemics, including spectacular, globally threatened species such as African Green Broadbill and Shelley’s Crimson wing. Bwindi is one of the few in Africa to have flourished throughout the last Ice Age and it is home to roughly half of the world’s mountain gorillas.Of Uganda’s forested reserves, Bwindi Impenetrable National Park is best known for its superb gorilla tracking, but it also provides refuge to elephant, chimpanzee, monkeys and various small antelope and bird species. Location Southwest, near Kabale

Gorilla trekking is one of the popular tourist activities in Bwindi Impenetrable National Park were you get a chance to trek one of the few habituated gorilla families in the forest. Depending on which region of Bwindi you are holding permits, experienced guides and trackers will accompany your party on an early morning trek into the dense rain forest on the mountain slopes. The journey, through dense foliage and up steep climbs, is abundantly rewarded with the lifetime experience of viewing mountain gorillas in their natural habitat. You will have an opportunity to be within metres of these magnificent apes, sharing in their daily lives and experiencing their day-to-day activities. Mountain gorillas are extremely rare with only an estimated 700 remaining in the wild. This is an experience you won’t soon forget! Mountain gorillas are wild animals and, as such, sightings cannot be guaranteed. However viewing success rates are over 90% 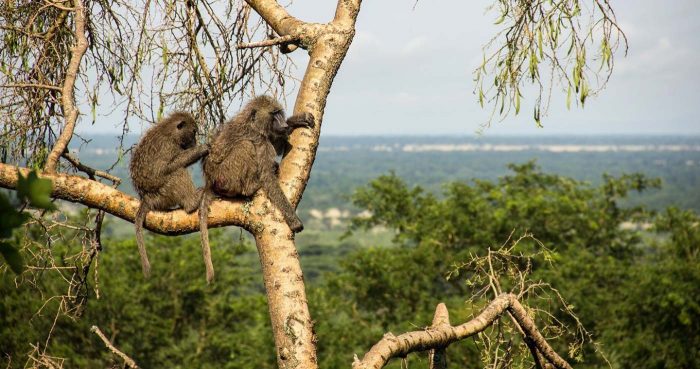